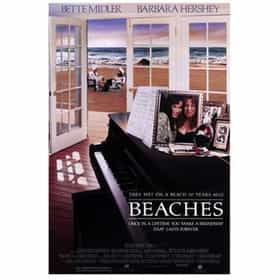 Beaches, is a 1988 American comedy-drama film adapted by Mary Agnes Donoghue from the Iris Rainer Dart novel of the same name. It was directed by Garry Marshall, and stars Bette Midler, Barbara Hershey, John Heard, James Read, Spalding Gray, and Lainie Kazan. The film's theme song, Hot 100 number one "Wind Beneath My Wings" won Grammy Awards for Record of the Year and Song of the Year in 1990. The film was released on VHS in August 1989, with a DVD release on August 13, 2002, followed by a special edition DVD on April 26, 2005. ... more on Wikipedia

Beaches is ranked on...

Beaches is also found on...