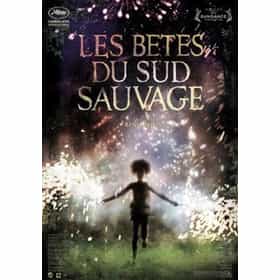 Beasts of the Southern Wild

Beasts of the Southern Wild is a 2012 American fantasy drama film directed by Benh Zeitlin and adapted by Zeitlin and Lucy Alibar from Alibar's one-act play Juicy and Delicious. After playing at film festivals, it was released on June 27, 2012, in New York and Los Angeles, and later expanded wider. The film was nominated for four Academy Awards at the 85th Academy Awards, in the categories Best Picture, Best Director, Best Adapted Screenplay, and Best Actress. At age 9, Wallis became the youngest Best Actress nominee in history. ... more on Wikipedia

lists about Beasts of the Southern Wild

Beasts of the Southern Wild is ranked on...

#121 of 157 The Best Movies You Never Want to Watch Again 156.2k VOTES A list of the most disturbing movies that, for whatever reason, you never, ever want to watch again. This list is full of gr...
#115 of 720 People who voted for Beasts of the Southern Wild... are 4x more likely to vote for Barbershop Franchise on this list are 3x more likely to vote for House Party Franchise on this list The Best Black Movies Ever Made, Ranked 664.3k VOTES The best black movies are favorites that explore African-American culture and themes. This list is ranked by film fans, many...
#32 of 182 The Best Movies of 2012 17.3k VOTES This is a list of the best movies of 2012, as ranked by experts and fans alike. The best movies of 2012 include gut-wrenchin...
#524 of 710 The Best Movies Roger Ebert Gave Four Stars 161.5k VOTES List of movies Roger Ebert gave four stars, ranked best to eh. This is NOT a complete list of all of Roger Ebert's four star...
#269 of 292 The Top Tearjerker Movies That Make Men Cry 214.2k VOTES Some classic, well-loved films are classified tearjerkers, but would all sad, depressing movies make the manliest men cry? N...
#12 of 28 The Best Live Action Kids Fantasy Movies 7.1k VOTES There's something especially magical about fantasy movies for kids. They spark young viewers' imaginations and encourage t...
#30 of 38 The Best Movies With A Little Girl Protagonist 1.1k VOTES Young girls are creative, curious, and fearless when it comes to pursuing their dreams. The best movies with a little girl...
#12 of 27 Great Movies About Precocious Children 477 VOTES Kids who are wise beyond their years are some of the most compelling individuals to watch on screen. The best movies about...
#21 of 22 Great Movies About Very Smart Young Girls 1.1k VOTES Solving crimes, acing tests, and bringing parents back together - smart girls can do it all. The top movies about sma...
#168 of 201 The Greatest Movies Of The 2010s, Ranked 31k VOTES You have a very important task ahead of you - voting for the best movies of the 2010s. While that may sound easy on the surf...
#15 of 99 The Best Movies With Wild in the Title 745 VOTES Have you ever noticed how many movies there are with wild in the name? This list ranks the best movies with wild in the titl...
#66 of 66 The Best Movies All Aspiring Actors Must Watch 2.1k VOTES For actors, watching other people acting is a great way to learn. Anyone in the industry could easily list off the names of ...
#20 of 30 The Best Drama Movies to Watch Stoned 139 VOTES When it comes to the best drama movies to watch on weed, your best bets are visually awesome movies with somewhat trippy&nbs...

Beasts of the Southern Wild is also found on...