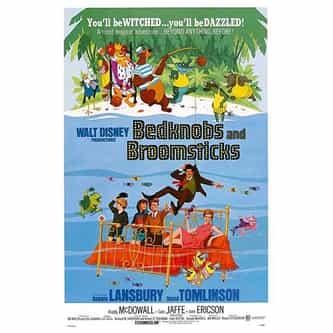 Tagline
You'll beWITCHED! You'll beDAZZLED! You'll be swept into a world of enchantment BEYOND ANYTHING BEFORE!

This film is a 1971 American musical film produced by Walt Disney Productions and released by Buena Vista Distribution Company in North America on December 13, 1971. It is based upon the books How to Become a Witch in Ten Easy Lessons and Bonfires and Broomsticks by English children's author Mary Norton. The film, which combines live action and animation, stars Angela Lansbury and David Tomlinson. ... more on Wikipedia

Bedknobs and Broomsticks IS LISTED ON