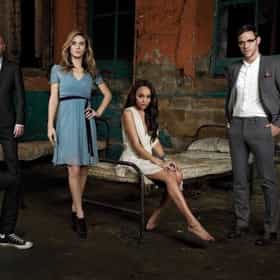 Bedlam is a British supernatural drama television series created by David Allison, Neil Jones, and Chris Parker. It was first broadcast on 7 February 2011 on Sky Living and Sky Living HD. The series finale was broadcast on 15 March 2011. In December 2011, it was announced that a second series had been commissioned for broadcasting in Spring 2012 with an updated cast. Series 2 was broadcast from June 2012 with Lacey Turner taking the lead as a suspended paramedic who can see dead people. On 13 November 2012 Jack Roth, who plays Max in the series, revealed that Bedlam may return for Series 3 and that a decision on the show's future is to be made around Christmas 2012. On 11 March 2013 ... more on Wikipedia

Bedlam is ranked on...

#82 of 113 The Best Horror TV Shows 26.6k VOTES The very best horror shows on television, ranked from best to worst. This list of the greatest horror shows also includes pi...
#48 of 49 The Best Procedural Dramas of All Time 732 VOTES Procedural dramas can get your adrenaline pumping and keep you hooked from the get go, but which procedural dramas are the b...
#45 of 59 The Best Supernatural Mystery Series Ever 14.4k VOTES The best supernatural mystery shows aren't afraid of ghosts, because that's exactly the thing they're investigating. The bes...

Bedlam is also found on...