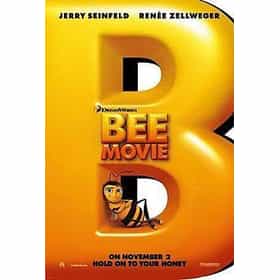 Bee Movie is a 2007 American computer animated family comedy film produced by DreamWorks Animation and distributed by Paramount Pictures. It stars Jerry Seinfeld and Renée Zellweger. Bee Movie is the first motion-picture script to be written by Seinfeld, who co-wrote it with Spike Feresten, Barry Marder, and Andy Robin. The film was directed by Simon J.Smith and Steve Hickner and produced by Seinfeld, Christina Steinberg and Cameron Stevning. The production was designed by Alex McDowell, and Christophe Lautrette was the art director. Nick Fletcher was the supervising editor and music for the film was composed by Rupert Gregson-Williams. The cast and crew include some veterans of ... more on Wikipedia

The Best Bee Movie Quotes 51 votes These are the best Bee Movie quotes and re-watching these clips make you realize how great the movie really is, even if you ...

Bee Movie is ranked on...

Bee Movie is also found on...