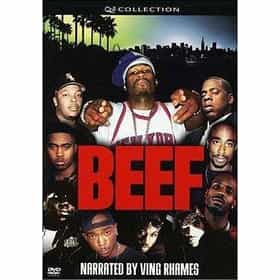 Beef is a 2003 film that documents the history of hip-hop feuds. The film's producers were Peter Spirer, Casey Suchan and Denis Henry Hennelly and the executive producer was Quincy Jones III. It was written by Peter Alton and Peter Spirer, and was narrated by actor Ving Rhames. This film takes a chronological look at battles dating back to rap music's infancy in the early 1980s. The notable rivalries discussed include KRS-One vs. MC Shan, Kool Moe Dee vs. Busy Bee, 50 Cent vs. Murder Inc., Tru Life vs. Mobb Deep, Common vs. Ice Cube & Westside Connection, the break-up of legendary group N.W.A, which includes Ice Cube's abrupt departure, and the later animosty between Dr. Dre and ... more on Wikipedia

Beef is ranked on...

Beef is also found on...