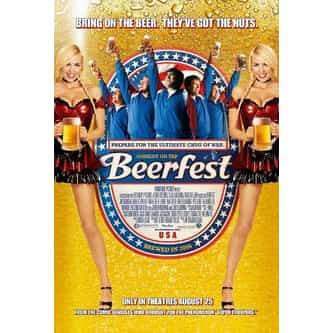 Tagline
Brewed in 2006
Bring on the beer. They've got the nuts.
Comedy on tap
Prepare for the ultimate chug of war.

Beerfest is a 2006 beer-themed comedy film by the comedy group Broken Lizard. Along with the regular members of Broken Lizard, other actors who appear in the movie include Will Forte, M. C. Gainey, Cloris Leachman, Jürgen Prochnow, Donald Sutherland, and Willie Nelson. In August 2014 during a Reddit AMA, when asked about where the concept for the movie came from, Jay Chandrasekhar said "We were at a Beer garden in Australia and we went on stage and challenged the top five ... more on Wikipedia

Beerfest IS LISTED ON