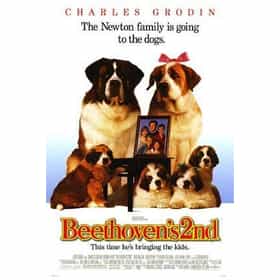 Beethoven's 2nd is a 1993 family film directed by Rod Daniel, and the first sequel to the 1992 film, Beethoven. It starred Charles Grodin, Bonnie Hunt, and Debi Mazar. It is the second of eight installments in the Beethoven film series. Initially, no theatrical sequel to Beethoven was planned, but it was produced after the unexpected financial success of it. It is the last one in the franchise to be released theatrically, as well as the last to feature the original cast. ... more on Wikipedia

Beethoven's 2nd is ranked on...

Beethoven's 2nd is also found on...