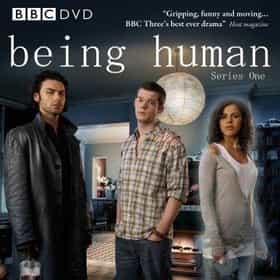 Being Human (BBC Three, 2008) is a British supernatural drama television series. It was created and written by Toby Whithouse for broadcast on BBC Three. The show blends elements of flatshare comedy and horror drama. The pilot episode starred Andrea Riseborough as Annie Sawyer, Russell Tovey as George Sands, and Guy Flanagan as John Mitchell – all of whom were sharing accommodation and attempting as best as they can to live a "normal" life and blend in with the ordinary humans around them. ... more on Wikipedia

Being Human is ranked on...