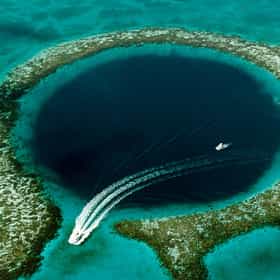 Belize is a nation-state on the eastern coast of Central America. It is the only country in Central America whose official language is English, though Belizean Creole and Spanish are also commonly spoken. Belize is bordered on the north by Mexico, on the south and west by Guatemala, and on the east by the Caribbean Sea. Its mainland is about 290 km long and 110 km wide. With 22,800 square kilometres of land and as of 2014 a population of 340,844, Belize has the lowest population density in Central America. The country's population growth rate of 1.97% per year is the second highest in the region and one of the highest in the Western Hemisphere. Belize's abundance of terrestrial and ... more on Wikipedia

Belize is ranked on...

Belize is also found on...