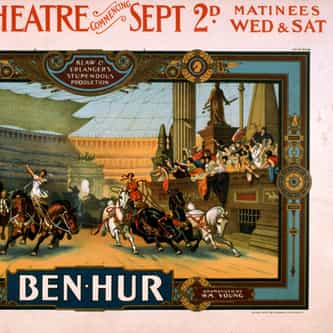 Ben Hur was an 1899 theatrical adaption of the novel Ben-Hur: A Tale of the Christ by Lew Wallace. The play was dramatized by William W. Young and produced by Marc Klaw and A. L. Erlanger. Inspired by the success of Wallace's popular novel, the stage production was notable for its elaborate use of spectacle. It had six acts with incidental music written by American composer Edgar Stillman Kelley. The stage production opened at the Broadway Theater in New York City on November 29, 1899, and ... more on Wikipedia

Ben-Hur IS LISTED ON