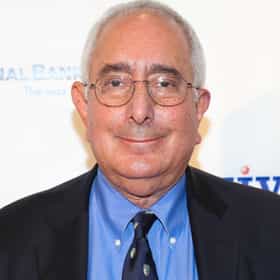 Benjamin Jeremy Stein (born November 25, 1944) is an American writer, lawyer, actor, and commentator on political and economic issues. He was a speechwriter for U.S. presidents Richard Nixon and Gerald Ford. Later, he entered the entertainment field and became an actor, comedian, and Emmy Award-winning game show host. He is most well-known on screen as the economics teacher in Ferris Bueller's Day Off (1986) and as Dr. Arthur Neuman in The Mask (1994) and Son of the Mask (2005). Stein co-wrote and starred in the 2008 documentary Expelled, which portrays intelligent design creationism as a scientifically valid alternative to Darwinian evolution and alleges a scientific conspiracy ... more on Wikipedia

Ben Stein is ranked on...

#325 of 524 Annoying Celebrities Who Should Just Go Away Already 1.2M VOTES The most annoying celebrities, ranked by entertainment fans themselves. These annoying celebs are obnoxious, overexposed, ...
#350 of 511 People who voted for Ben Stein... People under 30 are 3x more likely to vote for this Celebrities Nobody Cares About Anymore 3.4M VOTES Some of the greatest actors of all time have, in recent days, turned into a bunch of washed-up hacks that would be somehow b...
Here's a List of Every Known Republican Celebrity 1.8M VIEWS Conservative celebrities - this list of Republican celebrities has over 400 celebrities who are Republicans. What celebritie...
Celebrities Who Adopted Children 258.5k VIEWS Thinking of adopting? Let this list of celebrities who adopted children inspire you! Through the years many famous people ha...
32 Celebrities Who Married the Same Person Twice 1.3M VIEWS List of celebrities who married the same person twice, loosely ranked by fame and popularity. Several famous people have b...
#10 of 31 The Funniest Deadpan Comedians of All Time 2.2k VOTES This list contains information about the best deadpan comedians, loosely ranked by user votes. The best deadpan comedians ...
The Smartest Celebrities 807.7k VIEWS The smartest celebrities are those who have documented high IQs, multiple degrees from distinguished universities, and a h...
31 Actors Who Went Into Politics 18.3k VIEWS List of Actors Who Went Into Politics Ranked by Fame and Popularity. It seems that every actor has an opinion about politics...
Famous INTPs 289.5k VIEWS Not surprisingly, many actors, scientists and politicians are believed to be INTPs (Introverted iNtuitive Thinking Perceivin...
Celebrities Who Turned 75 in 2019 3.8k VIEWS UPDATED: Check out the celebrities turning 75 in 2020! Several famous people celebrated their 75th birthdays in 2019....
20 Famous People Who Went to Law School 131.2k VIEWS This list of famous people who went to law school is loosely ranked by fame and popularity. Several famous actors, musicians...
26 Famous People Who Were Valedictorians 335k VIEWS Which famous people were the valedictorians in their class? This list includes the most famous valedictorians to date, with ...

Ben Stein is also found on...