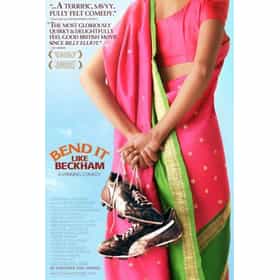 Bend It like Beckham is a 2002 British comedy-drama film starring Parminder Nagra, Keira Knightley, Jonathan Rhys Meyers, Anupam Kher, Shaznay Lewis and Archie Panjabi, first released in the United Kingdom. The film was directed by Gurinder Chadha. Its title refers to the football player David Beckham and his skill at scoring from free kicks by "bending" the ball past a wall of defenders. The movie is about the 18-year-old daughter of Punjabi Sikhs in London. She is infatuated with football but her parents have forbidden her to play because she is a girl. She joins a local women's team, which makes its way to the top of the league. A stage musical version of the film will ... more on Wikipedia