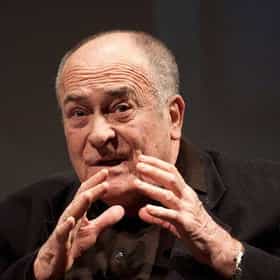 Bernardo Bertolucci (Italian: [berˈnardo bertoˈluccʃi]; 16 March 1941 – 26 November 2018) was an Italian director and screenwriter, whose films include The Conformist, Last Tango in Paris, 1900, The Last Emperor (for which he won the Academy Award for Best Director and the Academy Award for Best Adapted Screenplay), The Sheltering Sky, Little Buddha, Stealing Beauty and The Dreamers. In recognition of his work, he was presented with the inaugural Honorary Palme d'Or Award at the opening ceremony of the 2011 Cannes Film Festival.From 1979 until his death in 2018, he was married to screenwriter Clare Peploe. ... more on Wikipedia

Bernardo Bertolucci is ranked on...

#28 of 139 The Greatest Auteurs in Film History 13.1k VOTES An auteur is a filmmaker or director whose personal, individual production style and creative flare gives his or her films a...
#69 of 82 The Best-Ever Oscar Winners for Writing (Adapted Screenplay) 1.8k VOTES Every year the Academy evaluates a year's worth of brilliant original screenplays and picks what they believe to be the best...
Celebrities Who Died In 2018 746.2k VIEWS In a casual conversation, no one likes the surprise of receiving unpleasant news about a beloved celebrity's passi...

Bernardo Bertolucci is also found on...