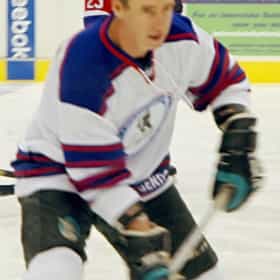 Bernard Irvine Nicholls (born June 24, 1961) is a Canadian former professional ice hockey centre, who played over 1000 games in the National Hockey League (NHL). His junior career was spent with the Kingston Canadians, where he established himself as a dynamic scorer and a multi-faceted talent. He was selected by the Los Angeles Kings in the fourth round of the 1980 NHL Entry Draft, 73rd overall. Over his 17-year playing career, Nicholls played 1127 games for the Los Angeles Kings, New York Rangers, Edmonton Oilers, New Jersey Devils, Chicago Blackhawks and San Jose Sharks, scoring 1209 points. He is one of only eight players in NHL history to score 70 goals in one season, and one of ... more on Wikipedia

Bernie Nicholls is ranked on...

Bernie Nicholls is also found on...