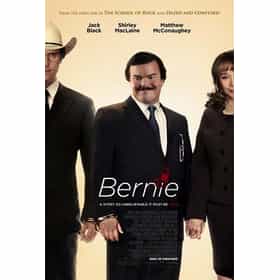 Bernie is a 2011 black comedy film directed by Richard Linklater, and written by Linklater and Skip Hollandsworth. The film stars Jack Black, Shirley MacLaine and Matthew McConaughey. It is based on a 1998 Texas Monthly magazine article by Hollandsworth, "Midnight in the Garden of East Texas,". Tiede (Jack Black) proved so highly regarded in Carthage that, in spite of having confessed to the police, the district attorney was eventually forced to request a rare prosecutorial change of venue in order to secure a fair trial. ... more on Wikipedia

Bernie is ranked on...

Bernie is also found on...