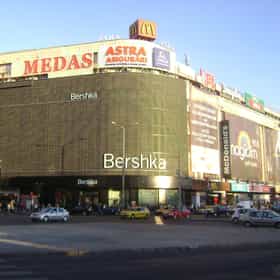 Bershka is a retailer and part of the Spanish Inditex group. The company was created in April 1998 as a new store and fashion concept, aimed at a young target market. It now has 910 stores in 64 countries around the world. The sales made from Bershka represent 10% of the Inditex group. On 6 September 2011, the company launched into the online market in France, Germany, Italy, Netherlands, Portugal, Spain and United Kingdom. ... more on Wikipedia

Bershka is ranked on...

#107 of 113 The Top Clothing Brands for Men 357.8k VOTES The best clothing brands ever for men come in a range of price points and styles, voted on by thousands of stylish, dapper, ...
#6 of 25 The Best Fast Fashion Stores 493 VOTES Trends change fast, and you have to be quick if you want to try out the hot new look of the moment. That's where these retai...