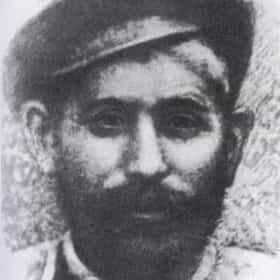 Besarion Ivanes dze Jughashvili, commonly known as Beso, (c. 1850 – 25 August 1909) was the father of Joseph Stalin. Born into a peasant family of serfs in Didi Lilo in Georgia, he moved to Tbilisi at a young age to be a shoemaker, working in a factory. He was invited to set up his own shop in Gori, where he met and married Ekaterine Geladze, with whom had three sons; only the youngest, Ioseb, lived. Once known as a "clever and proud" man, Jughashvili's shop failed and he developed a serious drinking problem, wherefore he left his family and moved back to Tbilisi in 1884, working in a factory again. He had little contact with either his wife or son after that point, and ... more on Wikipedia

Besarion Jughashvili is also found on...