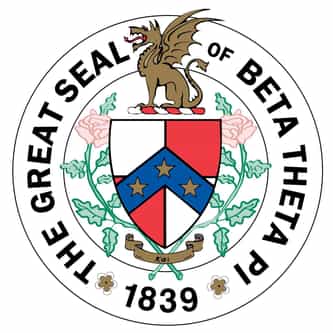 Beta Theta Pi is a North American social fraternity that was founded in 1839 at Miami University in Oxford, Ohio. The fraternity currently consists of 109 active chapters and 19 colonies in the United States and Canada. More than 199,000 members have been initiated worldwide and there are currently around 9,000 undergraduate members. Beta Theta Pi is the oldest of the three fraternities that formed the Miami Triad along with Phi Delta Theta and Sigma Chi. ... more on Wikipedia