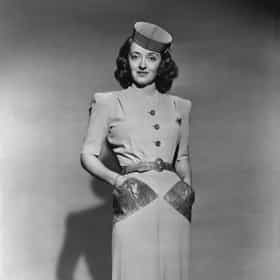 Ruth Elizabeth "Bette" Davis (; April 5, 1908 – October 6, 1989) was an American actress of film, television, and theater. With a career spanning 60 years, she is regarded as one of the greatest actresses in Hollywood history. She was noted for playing unsympathetic, sardonic characters, and was famous for her performances in a range of film genres, from contemporary crime melodramas to historical and period films, suspense horror, and occasional comedies, although her greatest successes were her roles in romantic dramas.After appearing in Broadway plays, Davis moved to Hollywood in the summer of 1930. However, her early films for Universal Studios (and as a loanout to other ... more on Wikipedia

Bette Davis is ranked on...

Bette Davis is also found on...