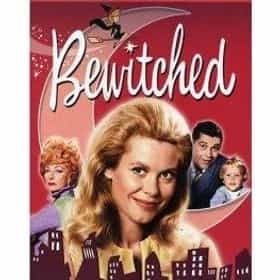 Bewitched is an American TV situation comedy fantasy which was broadcast for eight seasons on ABC from 1964 to 1972. It was created by Sol Saks under executive director Harry Ackerman, and starred Elizabeth Montgomery, Dick York, Agnes Moorehead, and David White. Dick Sargent replaced an ill York for the final three seasons. The show is about a witch who marries an ordinary mortal man, and vows to lead the life of a typical suburban housewife. Bewitched enjoyed great popularity, finishing as the number two show in America during its debut season, and becoming the longest-running supernatural-themed sitcom of the 1960s–1970s. The show continues to be seen throughout the world in ... more on Wikipedia

The Best Bewitched Episodes 1.5k votes List of the best Bewitched episodes, as voted on by other fans of the series. With so many memorable episodes of the show, i...
Behind-The-Scenes Stories Of 'Bewitched' 80.1k views Famous TV shows from the mid-20th century offer a lot of nostalgic value to modern viewers. One of the most popular, Bewitch...

Bewitched is ranked on...

#58 of 2,297 People who voted for Bewitched... People over 50 are 2x more likely to vote for this The Greatest TV Shows Of All Time 1.5M VOTES Choosing the best TV shows of all time means taking into account the best TV dramas, the best TV comedies, the best cartoons...
#123 of 311 The Best Sci Fi Television Series of All Time 944.7k VOTES Here is a list of the best sci-fi shows and best sci-fi series of all time, as ranked by hundreds of Ranker voters. Thi...
#91 of 590 The Best TV Theme Songs of All Time 323.2k VOTES The best TV theme songs and TV intros of all time will take you back to some of the greatest moments in TV. Television theme...
#28 of 295 People who voted for Bewitched... also upvote Harry Potter Franchise on The Most Rewatchable Movies also upvote Star Trek Franchise on The Greatest Sci-Fi Movies of All Time The Greatest Sitcoms in Television History 957.7k VOTES Best sitcoms ever to air on television includes some of the greatest sitcoms of all time as ranked by fans of TV. What's the...
#7 of 147 The Greatest TV Title Sequences Ever 43.8k VOTES The greatest TV title sequences of all time are those memorable opening credits scenes from many of the best TV shows of all...
#17 of 201 The Greatest TV Shows for Women 119k VOTES Behold, a complete list of the greatest TV shows for women, ranked by ladies who love to watch television! For stay-at-home ...
#20 of 204 The Most Important TV Sitcoms 82.5k VOTES These sitcoms are important because they either influenced a generation's culture or because they permanently influenced the...
#40 of 141 The Worst TV Series Finales Ever 164.7k VOTES The worst final episodes of great TV shows have a history almost as old as TV itself. Whenever an audience becomes so invest...
#25 of 271 The Best Female-Led TV Shows 25.7k VOTES While society has by no means reached actual equality, in the last few years television viewers have started to see an uptic...
#82 of 85 The Worst TV Theme Songs 25.8k VOTES List of worst TV theme songs ever, ranked by the people who had to listen to them before every episode. One of the mo...
#86 of 1,328 The Best Guilty Pleasure TV Shows 19.7k VOTES List of the best guilty pleasure TV shows, past and present, including sitcoms, dramas, reality shows, and game shows. These...
#84 of 273 The Greatest Supernatural Shows of All Time 459.4k VOTES The very best supernatural shows on television, ranked from best to worst. Popular supernatural TV shows have been a staple ...
#45 of 107 The Best TV Shows Set In New York City 1.9k VOTES If you love New York then you're in luck because it is a very popular setting for a television series. It's not just that it...
#29 of 72 The Best Romantic Comedy TV Shows 70.1k VOTES The very best romantic comedy shows on television are a little bit of funny and a whole lotta love. Popular romantic comedy ...
#2 of 22 The Best Comedy Shows About a Couple, Ranked 1.8k VOTES Romantic relationships have been a cornerstone of TV comedies since the sitcom genre was invented. The best couple comedy sh...

Bewitched is also found on...