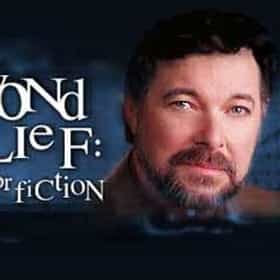 Beyond Belief: Fact or Fiction is an American television anthology series created by Lynn Lehmann, presented by Dick Clark Productions, and produced and aired by the Fox network from 1997 to 2002. Each episode featured five stories, all of which appeared to defy logic, and some of which were allegedly based on actual events. The viewer was offered the challenge of determining which are true and which are false. At the end of the show, it was revealed to the viewer whether the tales were true or works of fiction. The series was hosted by James Brolin in season one and later by Jonathan Frakes for the remainder of the series. The show was narrated by Don LaFontaine for the first three ... more on Wikipedia

lists about Beyond Belief: Fact or Fiction

Beyond Belief: Fact or Fiction is ranked on...

#26 of 70 The Creepiest Shows In TV History 51.2k VOTES Television loves to push the boundaries of what can be shown to a general audience. The medium has evolved from being a pl...
#32 of 93 The Best Paranormal TV Shows 72.5k VOTES What are the very best paranormal TV shows? Popular paranormal TV shows have been an entertainment staple for years, so...
#23 of 60 The Best Anthology TV Shows, Ranked 4k VOTES Variety is the spice of life, and that's what keeps viewers tuned into compelling anthology TV series. The best anthology TV...
#93 of 518 The Best Fox Broadcasting Company TV Shows 7.2k VOTES List of popular Fox Broadcasting Company shows, ranked from best to worst. This list of the top current and cancelled Fox Br...

Beyond Belief: Fact or Fiction is also found on...