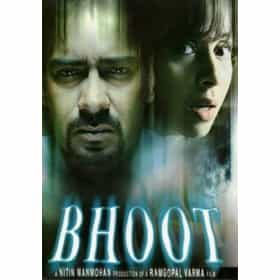 Bhoot is a 2003 Indian supernatural horror film. It was directed by Ram Gopal Varma and stars Ajay Devgan and Urmila Matondkar. It was perceived to be different from a typical Bollywood movie as it did not contain songs. It was later dubbed in Telugu as 12 Va Anthasthu and remade in Tamil as Shock. The film was box office hit. Urmila won several accolades and awards for her performance as a ghost possessed wife. Taran Adarsh wrote about her performance, "...the film clearly belongs to Urmila Matondkar all the way. To state that she is excellent would be doing gross injustice to her work. Sequences when she is possessed are simply astounding. If this performance doesn't deserve an ... more on Wikipedia

Bhoot is ranked on...

Bhoot is also found on...