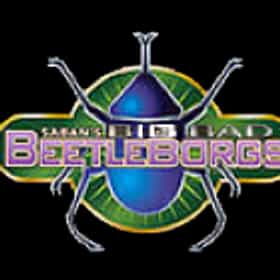 Big Bad Beetleborgs is an American live-action television series. The series is a co-production of Toei Company and Bugboy Productions. It aired for two seasons on Fox Kids between September 7, 1996 and March 2, 1998. Reruns later aired on UPN Kids from 1998 to 1999. On May 7, 2010, as part of the sale of the Power Rangers franchise, the copyright for Beetleborgs was transferred from BVS Entertainment to Saban Capital Group. The series adapted combat footage from the Metal Hero tokusatsu-series Juukou B-Fighter and B-Fighter Kabuto. ... more on Wikipedia

Big Bad Beetleborgs is ranked on...