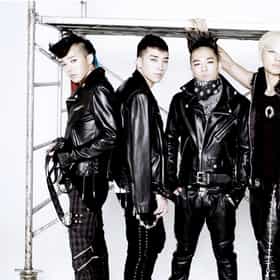 Big Bang (stylized as BIGBANG) is a South Korean boy band formed by YG Entertainment. The group consists of 4 members: G-Dragon, T.O.P, Taeyang, and Daesung. Member Seungri retired from the industry on March 11, 2019. They are often cited as one of the most influential acts to shape the K-pop industry by helping spread the Korean Wave internationally and are often dubbed the "Kings of K-pop" by the media. Their experimental and diverse use of music genres, personal involvement in producing their own records, and stage performances have received a positive critical reception. ... more on Wikipedia

BIGBANG is ranked on...

#357 of 1,038 The Worst Bands & Musicians of All Time 1.3M VOTES The worst bands in music history, ranked by music fans (and haters.) This list contains the most awful bands to listen to fr...
#1 of 174 Every Artist On The Coachella 2020 Lineup, Ranked 19.9k VOTES UPDATE: Due to safety concerns related to the Coronavirus outbreak, Coachella 2020 has been postponed to the weekends o...
#13 of 124 The Best K-pop Groups Of The 2010s 30.3k VOTES Here are the best K-pop groups of the 2010's decade, ranked by fans everywhere. From 2019 debuts to disbanded groups, this l...
#15 of 55 People who voted for BIGBANG... People on the West Coast are 2x more likely to vote for this The Greatest Boy Bands of All Time 376.7k VOTES Here's a list of the best boy bands of all time, with photos, ranked from best to worst by the community. Boy bands sometime...
#54 of 186 The Best Japanese Music Artists 14.6k VOTES Japanese music can encompasses a wide number of genres and artists. For some, music of Japan could signify the traditional m...
#16 of 36 Who Is The Most Famous Boy Band In The World Right Now? 151.2k VOTES While boy bands are nothing new (just ask the hits of the 90s), some of the most famous boy bands in the world today might h...
#1 of 16 The Best YG Entertainment Groups Of All-Time 1.3k VOTES Here are all the K-pop groups under YG Entertainment, ranked by fans everywhere. Founded in 1996 by former Seo Tai...

BIGBANG is also found on...