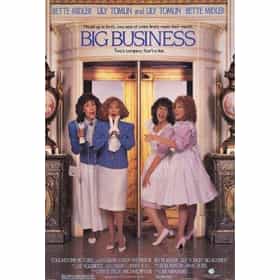 Big Business is a 1988 American comedy film farce starring Bette Midler and Lily Tomlin. The movie revolves around two sets of identical female twins who were mismatched at birth, with one ending in a wealthy urban family and the other in a poor rural family. It was produced by Touchstone Pictures, with the plot loosely based on The Comedy of Errors by William Shakespeare. The film co-stars Fred Ward, Edward Herrmann and includes many guest roles including Joe Grifasi and Seth Green. Michael Gross' sister plays a small role. Directed by Jim Abrahams, critical reaction to the film as a whole was generally lukewarm. Midler received an American Comedy Award in the category Funniest ... more on Wikipedia

Big Business is ranked on...

Big Business is also found on...