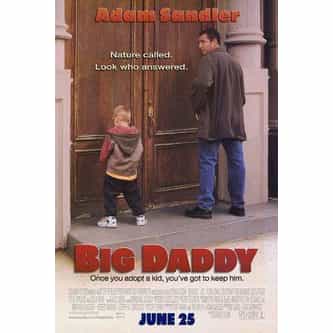 Tagline
Nature called. Look who answered.
Once you adopt a kid
you've got to keep him.

Big Daddy is a 1999 American comedy film directed by Dennis Dugan and starring Adam Sandler. The film was produced by Robert Simonds and released on June 25, 1999, by Columbia Pictures where it opened #1 at the box office with a $41,536,370 first weekend as well as a score of 41% on Metacritic. It was Adam Sandler's last film before starting his production company, Happy Madison Productions. ... more on Wikipedia

Big Daddy IS LISTED ON