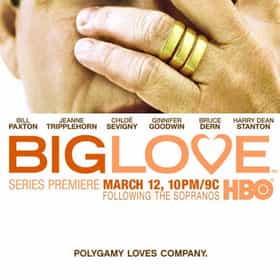 Big Love is an American television drama that aired on HBO between March 2006 and March 2011. The show is about a fictional fundamentalist Mormon family in Utah that practices polygamy. Big Love stars Bill Paxton, Jeanne Tripplehorn, Chloë Sevigny and Ginnifer Goodwin, as well as a large supporting cast. The series premiered in the United States on March 12, 2006 following the sixth-season premiere of the HBO series The Sopranos. The show was a success for HBO, running for five seasons before concluding its run on March 20, 2011. Big Love received widespread critical acclaim, and earned several major awards and nominations throughout its run. The third season was nominated for the ... more on Wikipedia

Big Love is ranked on...

#30 of 135 People who voted for Big Love... People in the Central US are 2x more likely to vote for this The Best of Premium Cable TV Series 190.7k VOTES Best cable series on premium cable includes some of the greatest TV shows in history. This list of premium cable original pr...
#272 of 383 The Best TV Shows of The Last 20 Years 1.5M VOTES This best TV show list represents the combined opinions of thousands of TV fans. Anyone can vote on this list of the best TV...
#50 of 51 What to Watch If You Love 'Ray Donovan' 232 VOTES Wondering what to watch after Ray Donovan? If seasons of intense drama about fixing the crimes of powerful people in this se...
#28 of 94 The Greatest HBO TV Shows of All Time 80.3k VOTES Now that HBOGo is accessible to everyone, there's no excuse for not keeping up with the best HBO TV shows!  This list o...
#289 of 476 The Best Television Shows of the 2000s 148k VOTES Some great TV shows came out of the 2000s, while some have even lived on. Here's a list of the best shows that aired from 20...
#50 of 55 The Greatest TV Shows About Love & Romance 1.5k VOTES There is no shortage of stories to tell about love and romance. Since the beginning of television, nearly every series has d...
#16 of 55 The Best HBO Series of the 2010s 1.5k VOTES These are the best 2010s HBO series, ranked by user votes. Throughout the 2010s, HBO released award-winning programs that re...
EW.com's HBO Series That Changed TV 5.1k VIEWS We look back at the shows that put the pay-cable network on the map -- like ''The Sopranos,'' ''Sex and the City,'' and, yes...

Big Love is also found on...