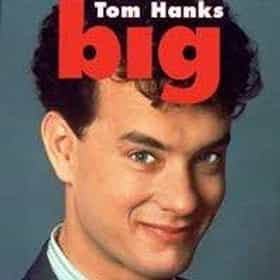 Big is a 1988 American fantasy comedy film directed by Penny Marshall, and stars Tom Hanks as Josh Baskin, a young boy who makes a wish "to be big" and is then aged to adulthood overnight. The film also stars Elizabeth Perkins, John Heard, and Robert Loggia and was written by Gary Ross and Anne Spielberg. Big was the latest and most successful of a series of age-changing comedies produced in the late 1980s, the others being: Like Father Like Son, 18 Again!, Vice Versa, and the Italian film Da grande. ... more on Wikipedia

'Big' Is Actually An Existential Nightmare 4.3k views Penny Marshall's Big is a fun, sweet family movie about a boy who makes a wish that unexpectedly comes true - or not. When y...