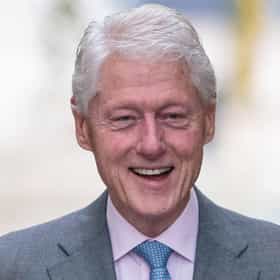 William Jefferson Clinton (born William Jefferson Blythe III; August 19, 1946) is an American politician who served as the 42nd president of the United States from 1993 to 2001. Prior to the presidency, he was the governor of Arkansas from 1979 to 1981, and again from 1983 to 1992, and the attorney general of Arkansas from 1977 to 1979. A member of the Democratic Party, Clinton was ideologically a New Democrat, and many of his policies reflected a centrist "Third Way" political philosophy. Clinton was born and raised in Arkansas and attended Georgetown University, University College, Oxford, and Yale Law School. He met Hillary Rodham at Yale and married her in 1975. After ... more on Wikipedia

10 Details About Bill Clinton's Past That Would Have Ended His Career Today 11.7k views If Bill Clinton were in office today, would his presidency survive the revelations of his numerous sexual scandals? It certa...
Bill Clinton's Loves & Hookups 1.5M views List of Bill Clinton's women, girlfriends, wife, and mistresses. Rumors of Bill Clinton relationships and affairs. With all ...
Funny Bill Clinton Quotes 935 votes Ranging from those he said before, during and after his presidency, there have been hundreds of quotes by and about Bill Cli...
Rare Photos Of The '92 Clinton Campaign 724 views Rife with puffy jackets, big hair, and a legendary saxophone, the images from Bill Clinton's 1992 presidential campaign are ...

Bill Clinton is ranked on...

Bill Clinton is also found on...