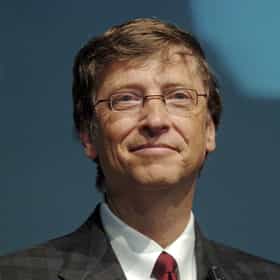 William Henry Gates III (born October 28, 1955) is an American business magnate, investor, author, philanthropist, and humanitarian. He is best known as the principal founder of Microsoft Corporation. During his career at Microsoft, Gates held the positions of chairman, CEO and chief software architect, while also being the largest individual shareholder until May 2014. Born and raised in Seattle, Washington, Gates launched Microsoft with Paul Allen in 1975; it went on to become the world's largest personal computer software company. Gates led the company as chairman and CEO until stepping down as CEO in January 2000, but he remained chairman and became chief software architect. In ... more on Wikipedia

How Steve Jobs And Bill Gates Went From Friends To Bitter Enemies 12.9k views Steve Jobs and Bill Gates knew each other for a very long time. They were like-minded technology buffs that met during the l...

Bill Gates is ranked on...

Bill Gates is also found on...