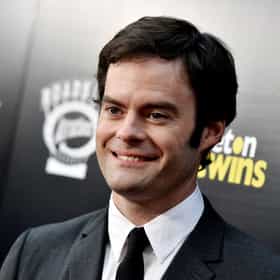 Bill Hader is ranked on...

#201 of 275 The Most Trustworthy Celebrities in the World 822.6k VOTES Trust: the belief that someone or something is reliable, good, honest, effective, etc. When it comes to celebrities, do any ...
#52 of 80 Who Is the Coolest Actor in the World Right Now? 51.6k VOTES Of all Hollywood's popular actors today, who do you think is the coolest actor out right now? While it may be a bit subjecti...
#614 of 1,148 The Best Actors in Film History 2.2M VOTES The best actors ever are ranked here in this list of the best actors in film history. These are the greatest actors ever to ...
#19 of 96 People who voted for Bill Hader... also upvote Twilight Saga Franchise on The Most Overrated Movies of All Time also upvote Will Ferrell on The Funniest People of All Time The Best SNL Cast Members of All Time 379.9k VOTES A list of the best Saturday Night Live cast members from the show's 40 seasons. The sketch comedy show has long been a favor...
#177 of 195 People who voted for Bill Hader... also upvote Dark Knight Franchise on The Best Movies of All Time also upvote Die Hard Franchise on The Best Movies of All Time The Best American Actors Working Today 160.2k VOTES There have been plenty of great American actors throughout film history, but which are the greatest working today? This list...
#348 of 389 The Most Overrated Actors Of All Time 1.1M VOTES This list of the most overrated actors of all time, has been ranked by critics and fans from all over the world. Actors are ...
#30 of 266 People who voted for Bill Hader... People outside of the US are 2x more likely to vote for this The Greatest Male Celebrity Role Models 104.7k VOTES Male celebrities as role models... what are we looking for? Maybe someone who knows how to lead, be a good team member, or h...
#17 of 23 Who Would Star In A Live-Action 'King Of The Hill' Movie? 10.6k VOTES King of the Hill might be one of the most hilarious and underrated shows of all time, but the show's 13-season run and ...
#24 of 70 People who voted for Bill Hader... People under 30 are 2x more likely to vote for this The Most Successful Saturday Night Live Alumni 51.3k VOTES This list of the most successful Saturday Night Live alumni in the show’s history, has been ranked by SNL fans. In the 40+ s...
#3 of 8 The Adult Cast Of 'IT: Chapter Two' Vs. Their Younger Counterparts 17.8k VOTES Just two little letters - helped by a diabolical clown, a stellar cast of kids, a red balloon, and Stephen King's frigh...
#12 of 119 Who Should Host the 2021 Oscars? 10k VOTES Who should host the next Oscars? Academy Award hosts throughout the years have been hilarious, fallen flat, caused controver...
#17 of 32 Celebrity Endorsements You Are Actually Okay With, Ranked 2.2k VOTES Like all of us, celebrities only have so much time in the day. Most of them have families and can’t be jet-setting off all a...
#48 of 82 The Greatest Actors Who Have Never Won an Emmy (For Acting) 29.4k VOTES What do Steve Carrell, Jerry Seinfeld, and Ed O'Neill have in common? No, it's not fame, fortune, or prestige. (Although t...
#14 of 53 Who Should Replace Jon Stewart as Host of The Daily Show? 6.9k VOTES UPDATE: On March 30, 2015, Comedy Central announced that Trevor Noah, The Daily Show correspondent since December 2014 will ...
#1 of 21 The Best WTF With Marc Maron Episodes Of 2018 133 VOTES With each passing year come the best new episodes of WTF with Marc Maron—a comedy podcast bringing you exactly that! An...
#1 of 10 2019 Golden Globe Best TV Actor Nominees 128 VOTES It's awards season and the nominations for the 2019 Golden Globe best actor in a television series are in so you can make yo...
#8 of 13 Who Would Star In A Remake Of 'The Wizard Of Oz' Today? 184 VOTES The Wizard of Oz remains one of Hollywood's most enduring classics thanks to its charming performances, memorable ...
#78 of 156 The Best People Who Hosted SNL In The 2010s 1.4k VOTES Despite cast changes, Saturday Night Live in the 2010s found a new kind of balance and settled comfortably into their cold o...
Celebrities Who Have Dissed Justin Bieber 133.7k VIEWS In the relatively short number of years Justin Bieber has been around he's done an impressive amount of stupid things. When ...
30+ Celebrities Who Believe in Ghosts 634.1k VIEWS This list contains information about celebrities who believe in ghosts. Several famous actors, musicians, athletes, and poli...
Famous People Who Voiced Cartoon Characters 4.8M VIEWS   Everyone knows that Walt Disney, Mel Blanc, and Dan Castellaneta have provided the voices to iconic cartoon charact...

Bill Hader is also found on...