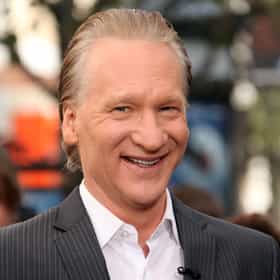 William Maher (; born January 20, 1956) is an American comedian, political commentator, and television host. He is known for the HBO political talk show Real Time with Bill Maher (2003–present) and the similar late-night show called Politically Incorrect (1993–2002), originally on Comedy Central and later on ABC. Maher is known for his sarcastic attitude, political satire and sociopolitical commentary. He targets many topics including religion, political correctness and the mass media.Maher supports the legalization of cannabis, serving on the advisory board of NORML. His critical views of religion were the basis for the 2008 documentary film Religulous. He is a supporter of animal ... more on Wikipedia

Bill Maher is ranked on...

Bill Maher is also found on...