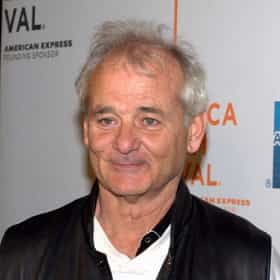 William James Murray (born September 21, 1950) is an American actor, voice actor, comedian, filmmaker, and writer. He first rose to fame on Saturday Night Live, a series of performances that earned him his first Emmy Award, and later starred in comedy films—including Meatballs (1979), Caddyshack (1980), Stripes (1981), Tootsie (1982), Ghostbusters (1984), Scrooged (1988), Ghostbusters II (1989), What About Bob? (1991), and Groundhog Day (1993). He also co-directed Quick Change (1990). Murray garnered additional critical acclaim later in his career, starring in Lost in Translation (2003), which earned him a Golden Globe and a BAFTA Award for Best Actor, as well as an Oscar nomination ... more on Wikipedia

Groundhog Day
The Best Bill Murray Movies 14.7k votes The best Bill Murray movies, ranked best to worst with movie trailers when available. Bill Murray got his start at Second Ci...
The Most Delightful Bill Murray Cameos 263 votes Few actors can brighten your day just by showing up in a bit part, but comedy legend Bill Murray is surely one of them. Murr...
The Best Bill Murray Film Character 19.3k votes Bill Murray has portrayed many iconic film characters over the years. Some have been hilarious, while others have been movin...
The Best Bill Murray Quotes 172 votes Though he has plenty of one-liners from his many movies, the best Bill Murray quotes come when the actor and comedian is off...
12 Horrible Stories You've Never Heard About Bill Murray 887.2k views No matter what he does, it seems like people will always love Bill Murray. Maybe it’s because most Americans have watched hi...
12 Pictures of Young Bill Murray 9.6k views Photos of a young Bill Murray show the popular comedian and American actor who first launched his career on the hit show Sat...
Hyde Park on Hudson Movie Quotes 80 votes "Hyde Park on Hudson" movie quotes give an inside look at the life, one weekend in particular, of President Frankl...
The Best Single Scenes from Bill Murray's Filmography 489 votes Who doesn’t love Bill Murray? The comedic actor, who eventually became known for his dramatic chops as well, has more than 8...
Every Time Bill Murray Seemed Ready to Quit a Movie in the Middle of a Scene 18.8k views People love seeing Bill Murray, even in the worst of films. He has a way of elevating trash by simply existing in his zen-li...
Bill Murray's Most Questionable Movie Choices, Ranked 364 votes Bill Murray is using his life to do all of the things. Photobomb engagement photos, party crash, join people's random soccer...
List of Bill Murray Interviews 7.4k views Bill Murray interviews, covering every point in his career. These TV, radio and online interviews with Bill Murray are liste...

Bill Murray is ranked on...

Bill Murray is also found on...