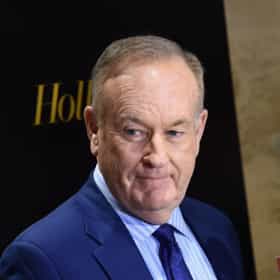 William James O'Reilly Jr. (born September 10, 1949) is an American journalist, author, and former television host. During the late 1970s and 1980s, he reported for local television stations in the United States and later for CBS News and ABC News. He anchored the tabloid television program Inside Edition from 1989 to 1995. O'Reilly joined the Fox News Channel in 1996 and hosted The O'Reilly Factor until 2017. The O'Reilly Factor was the highest-rated cable news show for 16 years, and he was described by media analyst Howard Kurtz as "the biggest star in the 20 year history at Fox News" at the time of his departure. He is the author of numerous books and hosted The Radio ... more on Wikipedia

Bill O'Reilly is ranked on...

#196 of 274 People who voted for Bill O'Reilly... People over 50 are 3x more likely to vote for this The Most Trustworthy Celebrities in the World 895.9k VOTES Trust: the belief that someone or something is reliable, good, honest, effective, etc. When it comes to celebrities, do any ...
#198 of 258 The Best Marvel Movie Actors Ever 631.6k VOTES Ah Marvel movies. It began in 1944 with serialized films of Captain America and 70 years later, are one of the biggest, most...
#122 of 266 Celebrities Who Should Run for President 621.4k VOTES Which celebrity would you actually vote for if they ran for President of the United States? If you can remember all the way ...
#22 of 91 People You Want South Park to Make Fun of 53.1k VOTES Which celebrity do you want to see made fun of by Trey and Matt on South Park? The show does a truly incredible job of ...
#12 of 102 The Lamest Authors of All Time 71.4k VOTES There are always going be writers (and books) some folks just don't like. Books, and the skills of the people who write th...
#241 of 862 Celebrity Death Pool 2016 370.1k VOTES Celebrity death pool 2016: Here's a large list of celebrities we think just might die this year. The only certainties in l...
#50 of 87 Guests You Hope to See on Late Show with Stephen Colbert 8.2k VOTES Late Show signed back on with Stephen Colbert at the helm in the summer of 2015, prime presidential election season, and the...
#61 of 113 People We Loved to Hate in 2013 40.4k VOTES These are the People we loved to hate in 2013. This list includes a slew of shocking, disheartening and downright dirty happ...
#111 of 159 Celebrity Death Pool 2013 15.4k VOTES Every year we lose more and more famous celebrities. Whether it's from natural causes, suicide, drug abuse or just plain cra...
#22 of 57 Dream Presidential Debate Moderators 12.3k VOTES These dream presidential debate moderators might not ever get the chance to prove how awesome they would be at moderating pr...
#10 of 12 TV Personalities You'd Want to Play Drinking Games With 2.1k VOTES We've all been there. A high school friend's basement while their parents are away. A college buddy's back porch on a lazy S...
#5 of 8 Who Is the Worst Person of the Week? (May 23-29) 234 VOTES Worst Person of the Week doesn't depend on seasons or weather, only on human greed and foolishness. So with summer approachi...
Famous Irish Americans 50.8k VIEWS This list includes famous Irish Americans of both today and throughout history, hot pics included! (Famous Irish people take...
Celebrities Who Had To Quit Drinking 511k VIEWS List of celebrities who quit drinking. Many celebrities have given up alcohol. Some of these famous people gave up drinking ...
Famous People Named William and Bill 64.5k VIEWS List of famous people named Bill, along with photos. How many celebrities named William can you think of? The famous Bills b...
The Smartest Celebrities 807.7k VIEWS The smartest celebrities are those who have documented high IQs, multiple degrees from distinguished universities, and a h...
33 Famous People Who Were Teachers 155k VIEWS List of Famous People Who Were Teachers ranked by fame and popularity. There is an old saying, “those who can't do, teach....
Celebs (Including Republicans) Who Say Trump Is Horrible 29.5k VIEWS President Donald Trump's famous haters have no qualms being open with their disdain for him. Seemingly every day, Trump...
Celebrity Lakers Fans 302.9k VIEWS Go team! This is a list of celebrity Lakers fans, ranked by fame and popularity. The Los Angeles Lakers basketball team has ...

Bill O'Reilly is also found on...