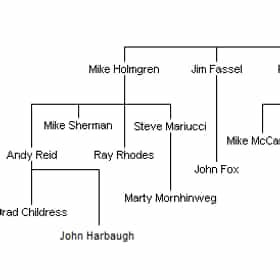 William Ernest Walsh (November 30, 1931 – July 30, 2007) was an American football coach. He served as head coach of the San Francisco 49ers and the Stanford Cardinal football team, during which time he popularized the West Coast offense. After retiring from the 49ers, Walsh worked as a sports broadcaster for several years and then returned as head coach at Stanford for three seasons. Walsh went 102–63–1 with the 49ers, winning 10 of his 14 postseason games along with six division titles, three NFC Championship titles, and three Super Bowls. He was named NFL Coach of the Year in 1981 and 1984. In 1993, he was elected to the Pro Football Hall of Fame. ... more on Wikipedia

Bill Walsh is ranked on...

Bill Walsh is also found on...