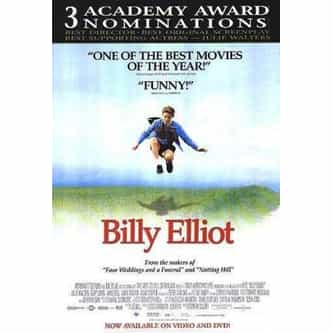 Tagline
Inside every one of us is a special talent waiting to come out. The trick is finding it.

Billy Elliot is a 2000 British dance drama film written by Lee Hall and directed by Stephen Daldry. Set in north-eastern England during the 1984-85 coal miners' strike, it stars Jamie Bell as 11-year-old Billy, an aspiring dancer dealing with the negative stereotype of the male ballet dancer, Gary Lewis as his coal miner father, Jamie Draven as Billy's older brother, and Julie Walters as his ballet teacher. In 2001, author Melvin Burgess was commissioned to write the novelisation of the ... more on Wikipedia

Billy Elliot IS LISTED ON