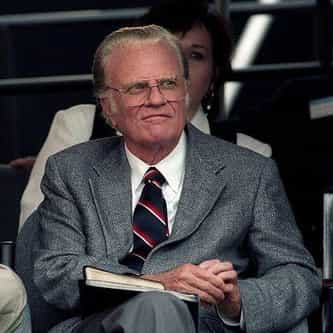 William Franklin Graham Jr. (November 7, 1918 – February 21, 2018) was an American evangelist, a prominent evangelical Christian figure, and an ordained Southern Baptist minister who became well-known internationally in the late 1940s. One of his biographers has placed him "among the most influential Christian leaders" of the 20th century.As a preacher, he held large indoor and outdoor rallies with sermons that were broadcast on radio and television; some were still being ... more on Wikipedia

Billy Graham IS LISTED ON