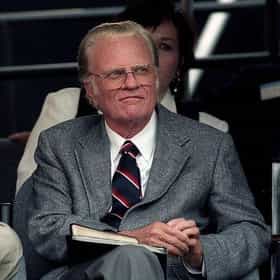 William Franklin Graham Jr. (November 7, 1918 – February 21, 2018) was an American evangelist, a prominent evangelical Christian figure, and an ordained Southern Baptist minister who became well-known internationally in the late 1940s. One of his biographers has placed him "among the most influential Christian leaders" of the 20th century.As a preacher, he held large indoor and outdoor rallies with sermons that were broadcast on radio and television; some were still being re-broadcast into the 21st century. In his six decades on television, Graham hosted annual "Crusades", evangelistic campaigns that ran from 1947 until his retirement in 2005. He also hosted the ... more on Wikipedia

Billy Graham is ranked on...

Billy Graham is also found on...