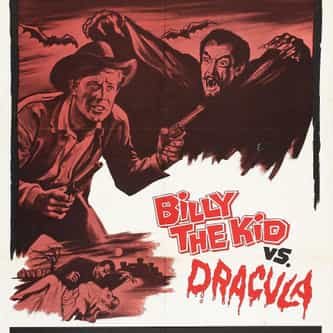 Tagline
The West's deadliest gunfighter! The world's most diabolical killer!

Billy the Kid Versus Dracula

Billy the Kid vs. Dracula is a 1966 American low-budget horror/western film directed by William Beaudine. It was released theatrically as part of a double bill, along with Jesse James Meets Frankenstein's Daughter. Both films were shot in eight days at Corriganville Movie Ranch and at Paramount Studios in mid 1965; both were the final feature films of director William Beaudine. The film revolves around the eponymous outlaw trying to save his fiancee from Dracula. The films were produced by ... more on Wikipedia

Billy the Kid Versus Dracula IS LISTED ON

#14 of 15
2.1k VOTES 15 Of The Most Memorable Cinematic Takes On Dracula Over The Centuries
#66 of 100
892 VOTES The Best John Carradine Movies
List of All Cult Classic Movies John Carradine Western Roles