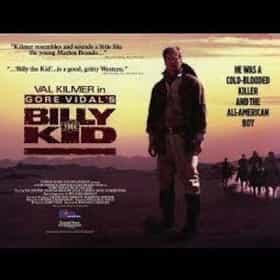 Gore Vidal's Billy the Kid, also known as Billy the Kid, is a 1989 American western film about famed gunman Billy the Kid. One of many depicting the events surrounding the outlaw during his participation in the Lincoln County War, this film, though little known, has routinely been described as the most historically accurate version to date. Written by Gore Vidal and directed by William A. Graham, Val Kilmer stars in the lead role of William Bonney aka Billy the Kid, with a supporting cast including Wilford Brimley, John O'Hurley, Duncan Regehr, and Ned Vaughn. While receiving little general attention, the TV-movie was acclaimed by fans of the western genre due to its comparative ... more on Wikipedia

Billy the Kid is ranked on...