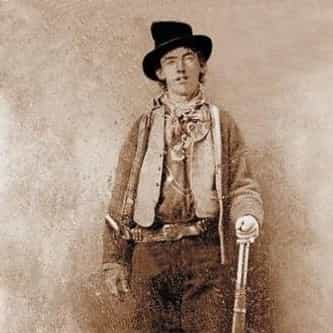 Billy the Kid (born Henry McCarty September 17 or November 23, 1859 – July 14, 1881, also known as William H. Bonney) was an American Old West outlaw and gunfighter who killed eight men before he was shot and killed at age 21. He took part in New Mexico's Lincoln County War, during which he allegedly committed three murders. McCarty was orphaned at age 14. The owner of a boarding house gave him a room in exchange for work. His first arrest was for stealing food at age 16 in late 1875. Ten ... more on Wikipedia

Billy the Kid IS LISTED ON