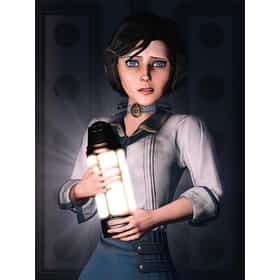 BioShock Infinite is a first-person shooter video game developed by Irrational Games and published by 2K Games. It was released worldwide for the Microsoft Windows, PlayStation 3, and Xbox 360 platforms on March 26, 2013; an OS X port by Aspyr was later released on August 29, 2013 and a Linux port was released on March 17, 2015. Infinite is the third installment in the BioShock series, and though it is not immediately part of the storyline of previous BioShock games, it features similar gameplay concepts and themes. Irrational Games and creative director Ken Levine based the game's setting on historical events at the turn of the 20th century, such as the 1893 World's Columbian ... more on Wikipedia

14 Utterly Bonkers Bioshock Fan Theories That Will Make You Question Your Reality 12k votes The BioShock series is arguably one of the most important video game franchises of all time. The first-person shooter games ...

BioShock Infinite is ranked on...