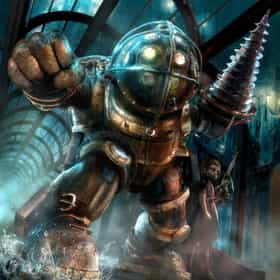 BioShock is a first-person shooter video game developed by 2K Boston, and published by 2K Games. The game was released for Microsoft Windows and Xbox 360 platforms in August 2007; a PlayStation 3 port by Irrational, 2K Marin, 2K Australia and Digital Extremes was released in October 2008, and an OS X port by Feral Interactive in October 2009. A mobile version was developed by IG Fun. The game's concept was developed by Irrational's creative lead, Ken Levine, and was based on the ideas of Objectivism as highlighted by Ayn Rand, while incorporating influences from other authors such as George Orwell. The game is considered a spiritual successor to the System Shock series, which many of ... more on Wikipedia

The 25 Most Shocking Quotes From 'BioShock' 74 votes BioShock rocked the video game industry when it was first released in 2007. With its innovative concept, fun gameplay mechan...

BioShock is ranked on...

BioShock is also found on...

List of All Horror Games Games Made With the Havok Engine