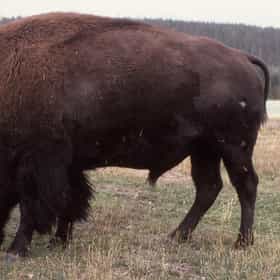 Bison are large, even-toed ungulates in the genus Bison within the subfamily Bovinae. Two extant and six extinct species are recognised. Of the six extinct species, five became extinct in the Quaternary extinction event. Bison palaeosinensis evolved in the Early Pleistocene in South Asia, and was the evolutionary ancestor of B. priscus (steppe bison), which was the ancestor of all other Bison species. From 2 million years ago to 6,000 BC, steppe bison ranged across the mammoth steppe, inhabiting Europe and northern Asia with B. schoetensacki (woodland bison), and North America with B. antiquus, B. latifrons, and B. occidentalis. The last species to go extinct, B. occidentalis, was ... more on Wikipedia

Bison is ranked on...

38 Incredible Albino (and Leucistic) Animals 4.5M VIEWS Albino animals have a genetic mutation that causes an absence of tyrosinase in their pigment cells, which means they don't...