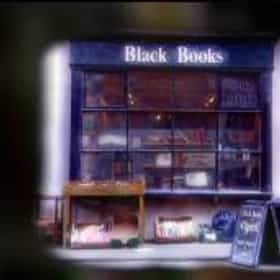 Black Books is a British sitcom created by Dylan Moran and Graham Linehan that was broadcast on Channel 4 from 2000 to 2004. Starring Moran, Bill Bailey and Tamsin Greig, the series is set in the eponymous London bookshop Black Books and follows the lives of its owner Bernard Black, his assistant Manny Bianco and their friend Fran Katzenjammer. The series was produced by Big Talk Productions, in association with Channel 4. Black Books was produced in a multiple-camera setup, and was primarily filmed at Teddington Studios in Teddington, London, with exterior scenes filmed on location on Leigh Street and the surrounding areas in Bloomsbury. The debut episode premiered on 29 September ... more on Wikipedia

Black Books is ranked on...

#224 of 281 The Best Cult TV Shows of All Time 220.3k VOTES List of the best cult TV shows ever, ranked by their loyal fans. TV series that develop cult followings are known for their ...
#136 of 169 The TV Shows Most Loved by Hipsters 29k VOTES List of TV shows hipsters love, currently running and from the past. Perhaps a TV-watching hipster seems like an oxymoron; a...
#317 of 1,328 The Best Guilty Pleasure TV Shows 19.7k VOTES List of the best guilty pleasure TV shows, past and present, including sitcoms, dramas, reality shows, and game shows. These...
#66 of 100 The Best Rainy Day Shows To Watch When You're Bored And Stuck Inside 1k VOTES Whatever reason you're stuck inside, due to rain or some good, old-fashioned social distancing,  you can at least relax...
#59 of 75 The Best Sitcoms That Aired Between 2000-2009, Ranked 91k VOTES List of the best sitcoms that aired in 2000-2009, as ranked by sitcom fans. Sitcoms have been a staple of television since t...
#11 of 117 The Best British Comedy Series Ever 10.9k VOTES British comedies might be some of the funniest shows on either side of the pond. The humor is just different than American c...
#9 of 512 The Best Channel 4 TV Shows 3.4k VOTES List of popular Channel 4 shows, ranked from best to worst. This list of the top current and cancelled Channel 4 TV series i...
#4 of 47 The Best TV Shows Set In London 268 VOTES London is calling and it says that it is a marvelous setting for a television series. Whether it's a British show or an Amer...
#9 of 38 The Best 2000s British Sitcoms 4k VOTES These are the best 2000s British sitcoms, ranked from best to worst by user votes. Some top 2000s British comedy shows are f...