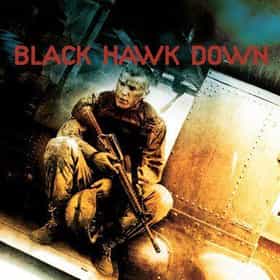 Black Hawk Down is a 2001 American-British war film directed by Ridley Scott. It is an adaptation of the 1999 book of the same name by Mark Bowden based on his series of articles published in The Philadelphia Inquirer. The 29-part series chronicled the events of a 1993 raid in Mogadishu by the U.S. military aimed at capturing faction leader Mohamed Farrah Aidid and the ensuing battle. The film features a large ensemble cast, including Josh Hartnett, Eric Bana, Ewan McGregor, Tom Sizemore, William Fichtner, Jason Isaacs, and Sam Shepard. It won two Oscars for Best Film Editing and Best Sound Mixing at the 74th Academy Awards. The movie was received positively by many American film ... more on Wikipedia

lists about Black Hawk Down

Black Hawk Down is ranked on...

Black Hawk Down is also found on...