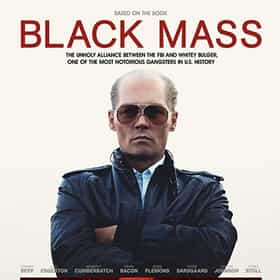 Black Mass is a 2015 American biographical crime drama film directed by Scott Cooper, based on the 2001 book Black Mass: The True Story of an Unholy Alliance Between the FBI and the Irish Mob by Dick Lehr and Gerard O'Neill. In 1975, James "Whitey" Bulger (Johnny Depp), leader of the Winter Hill Gang, controls most organized crime within South Boston, along with his right-hand man Stephen Flemmi (Rory Cochrane), newcomer Kevin Weeks (Jesse Plemons), and callous hitman Johnny Martorano (W. Earl Brown). ... more on Wikipedia

Black Mass is ranked on...

#10 of 16 The Worst Bald Caps In Film And TV 5.2k VOTES Actors often have to make an effort to change their physical features in order to truly embody their characters. T...
#52 of 144 The Best Movies With The Most F-Bombs 1.4k VOTES Ever wonder which movies have the most f-words in them? Then you're in the right place, this list compiles movies that drop ...
#25 of 67 The Best New Crime Movies of the Last Few Years 434 VOTES Current crime movies come in multiple forms. Many are dramas, but a few have a more comedic twist. Some offer&nbsp...
#2 of 34 The Best New Gangster Movies of the Last Few Years 1.1k VOTES Most gangsters are, by definition, bad people. They're criminals and lowlifes and killers. The best new gangster films take ...
#31 of 58 The Best Johnny Depp Movies 38.8k VOTES List of the best Johnny Depp movies, ranked best to worst, with movie trailers when available. Ever since making his film de...
#18 of 71 The Top 20+ Best Kevin Bacon Movies of All Time, Ranked 8k VOTES If you’re in the mood to binge watch the best Kevin Bacon movies of all time, you’ll want to start with the top-ranked films...
#6 of 21 The Best Gangster Biopics 4k VOTES The gangster holds a special place in the popular imagination, so it’s no surprise that gangster films are some of the most ...
#40 of 100 Movies Turning 5 In 2020 414 VOTES Let's take a short walk down memory lane to look back at the movies released in 2015. Believe it or not, they turn five...
#19 of 151 The Best Movies About Massachusetts 481 VOTES Which of these movies about Massachusetts are the best? It's time to vote up the best movies set in the Bay State. Some of t...
#7 of 20 The Best Drama Movies Set in Boston 93 VOTES The best drama movies set in Boston feature several A-list stars who come from the city. Mark Wahlberg, Matt Damon, and...

Black Mass is also found on...