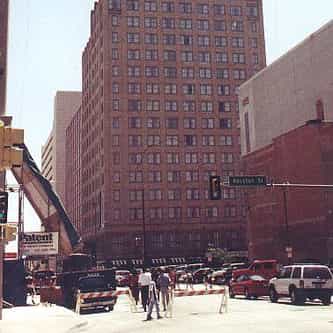 The Blackstone Hotel is the tallest hotel in downtown Fort Worth, Texas, at 268 ft tall. Located on the corner of Fifth and Main Streets, it is noted for its art deco with terra cotta ornamentation with setbacks on the top floors. The hotel was constructed in 1929, and sat vacant for nearly 20 years. The Blackstone Hotel guest list is full of notable people including Presidents of the United States ranging from President Harry Truman to President Richard Nixon. The hotel was also host for ... more on Wikipedia