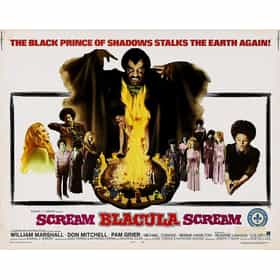 Blacula is a 1972 American blaxploitation horror film produced for American International Pictures. It was directed by William Crain and stars William Marshall in the title role about an 18th-century African prince named Mamuwalde, who is turned into a vampire and later locked in a coffin by Count Dracula. Two centuries later, the now-undead Mamuwalde rises from his coffin attacking various residents in modern day Los Angeles. Mamuwalde later meets Tina, a woman he believes to be the reincarnation of his deceased wife Luva. Blacula was released to mixed reviews in the United States, but was one of the top grossing films of the year. It was the first film to receive an award for Best ... more on Wikipedia

Blacula is ranked on...

#295 of 721 The Best Black Movies Ever Made, Ranked 671.1k VOTES The best black movies are favorites that explore African-American culture and themes. This list is ranked by film fans, many...
#100 of 132 The Best '70s Horror Movies 50.9k VOTES List of the best '70s horror movies, ranked by horror buffs, film buffs, and Ranker buffs. President Richard Nixon’s resigna...
#108 of 178 The Best Monster Movies 7.9k VOTES The best monster movies are sure to give you a good scare, so if you’re looking for a good monster flick to watch next, this...
#37 of 161 The Best Horror Movies Rated PG 2.9k VOTES This list of PG horror movies is ranked from best to worst so you can find your next favorite family-friendly horror mo...
#16 of 43 The Best Exploitation Movies of the 1970s 1.8k VOTES The best ‘70s exploitation movies are a dizzying blend of graphic sex, sensational violence, and a dash of kitsch. Nazis, fa...
#7 of 30 The Best Black Horror Movies 556 VOTES Some of the scariest movies feature talented casts of African American or black actors and actresses. The top black horror m...
#90 of 234 The Best PG Action/Adventure Movies 3.5k VOTES List of PG action/adventure movies, ranked from best to worst with movie trailers when available. This list takes the best P...
#15 of 123 The Best Horror Movies of 1972 722 VOTES List of the best 1972 horror movies, ranked by how many upvotes they've received by other fans of the genre. All types of sc...

Blacula is also found on...